The advantage of this format is that the images, sound and presentation software are compiled to a self contained PC executable file (*.exe). Thus the AV will play on any PC without the need to install any software. AV competition rules normally require that the entry be made in this format. The normal parameters for this format are:

The XGA dimensions are used since this is compliant with recent generation PCs as well as being the current standard for data projectors.

DVDThe intended use of the DVD format is for display of motion pictures on television sets and it has a resolution of 720×486 (NTSC) and 720×576 (PAL). This is a much poorer resolution compared to the PC executable. To make matters worse TV sets generally lose about 10% of the border due to overscan and hence the result is very close to the old VGA 640×480 standard. In addition neither the encoding nor the TV set honour colour profiles and hence colour accuracy is not guaranteed.

There is a role however for the DVD. Virtually every household has a DVD player and hence this is a safe format to use for distribution. In addition this is the ideal format to use for a larger audience gathered in front of a TV.

DVD’s are generally not permitted for AV competitions, one exception being for APS approved exhibitions.

There are a large number of different formats which are targeted for different devices such as Webservers, mobile phones, game consoles, media players, PDA’s and set top boxes. For example Flash Video (FLV) is used on YouTube and Webservers.

Photodex Corporation of the U.S.A. produce three versions of ProShow

The more expensive versions have a greater feature list. ProShow standard does not support DVD output and hence it is recommended that only ProShow Gold and Producer be considered. Most amateur photographers will find that ProShow Gold provides all the needed features. ProShow Producer has features which will interest the more creative photographer. The Photodex Web site contains numerous examples and previews.

Photodex provide free software upgrades for a period of one year after purchase. After that time upgrades for the same or a different product may be purchased at any time. Photodex also has a loyalty program enabling savings on upgrades. For example after ProShow Gold has been owned for two years then a 50% discount is offered on upgrade to ProShow Producer.

15 day fully functional trial downloads are available. These will continue to function at the end of the trial period by purchase of a licence.

ProShow is the most popular application in the U.S. and Australia.

PicturesToExe (PTE) is produced by WnSoft and is very popular in Europe and the UK. There are two versions:

It is recommended that only the Deluxe version be considered since the Standard version does not support DVD and other video formats. PTE has always been renowned for its smooth transitions.

A 30 day trial version of the software with limited features is available. The WnSoft Web site contains numerous tutorials, examples and a user forum. PTE presentations has some good examples.

Wings Platinum is produced by AV Stumpfl. Since the feature rich Wings Platinum Basic version is a free download it is rapidly growing in popularity and was featured in the November 2007 issue of Australian Photography. Wings Platinum is also available in Starter, Advanced, Pro and Multidisplay versions which require a licence fee.

Mac users are generally constrained to producing AVs in motion picture format such as DVD and Quicktime. As explained above, these formats produce an inferior AV quality.

FotoMagico from Boinx Software provides high resolution output in a proprietary format. The only caveat therefore is that playback is only possible from a Mac computer with the run time package installed.

There are two versions with the following pricing packages

The APS has approved the use of FotoMagico for APS endorsed AV competitions and organisers are now required to provide a MAC computer.

ProShow allows an intro show to appear before the menu or playback begins. This is largely intended for commercial photographers who wish to play a commercial clip at the beginning of their AVs. It is enabled by default to show a ProShow advertising clip. To disable this feature under ‘Create Executable’ go to ‘Shows’ and untick the ‘Include Intro Show’ box as shown in the following diagram.

In the ‘Output Options’ there are selections which are important for both the smooth running of the show and its quality.

This is shown in the following diagram. 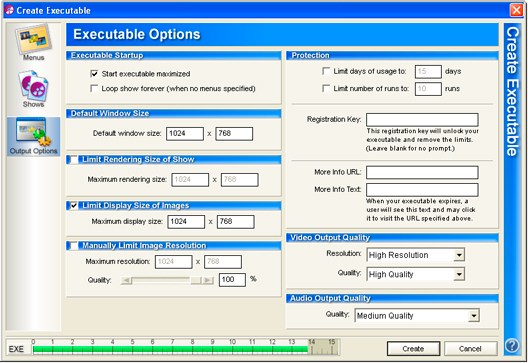